In the past posts, we’ve been looking at how Kafka could be setup via Docker and some specific aspect of a setup like Schema registry or Log compaction. We discussed broker, topic and partition without really digging into those elemetns. In this post, we will provide a definition for each important aspect of Kafka.

We start first by setting up a Kafka on Docker so that we can illustrate our points:

Broker in the context of Kafka is exactly the same usage as a broker in the messaging delivery context. It is the agent which accepts messages from producers and make them available for the consumers to fetch.

The broker functionalities include:

The last point is what makes Kafka highly available - a cluster is composed by multiple brokers with replicated data per topic and partitions. A leadership election is used to identifier the leader for a specific partition in a topic which then handles all read and writes to that specific partition. It’s also possible to configure the cluster and consumers to read from replicas rather than leader paritions for efficiency.

Another important aspect of Kafka is that messages are pulled from the Broker rather than pushed from the broker. Pros and cons with the reason why Kafka is a pulling system are addressed in the official documentation. One of the important aspect is that a pull system allows the consumer to define the processing rate as it will pull as many messages as it can handle. This is ideal in setting where many consumers would have different processing capabilities, as opposed to a push mechanism where the speed is dictated by the broker.

Events submitted by producers are organized in topics. A topic in Kafka can be written to by one or many producers and can be read from one or many consumers (organised in consumer groups). 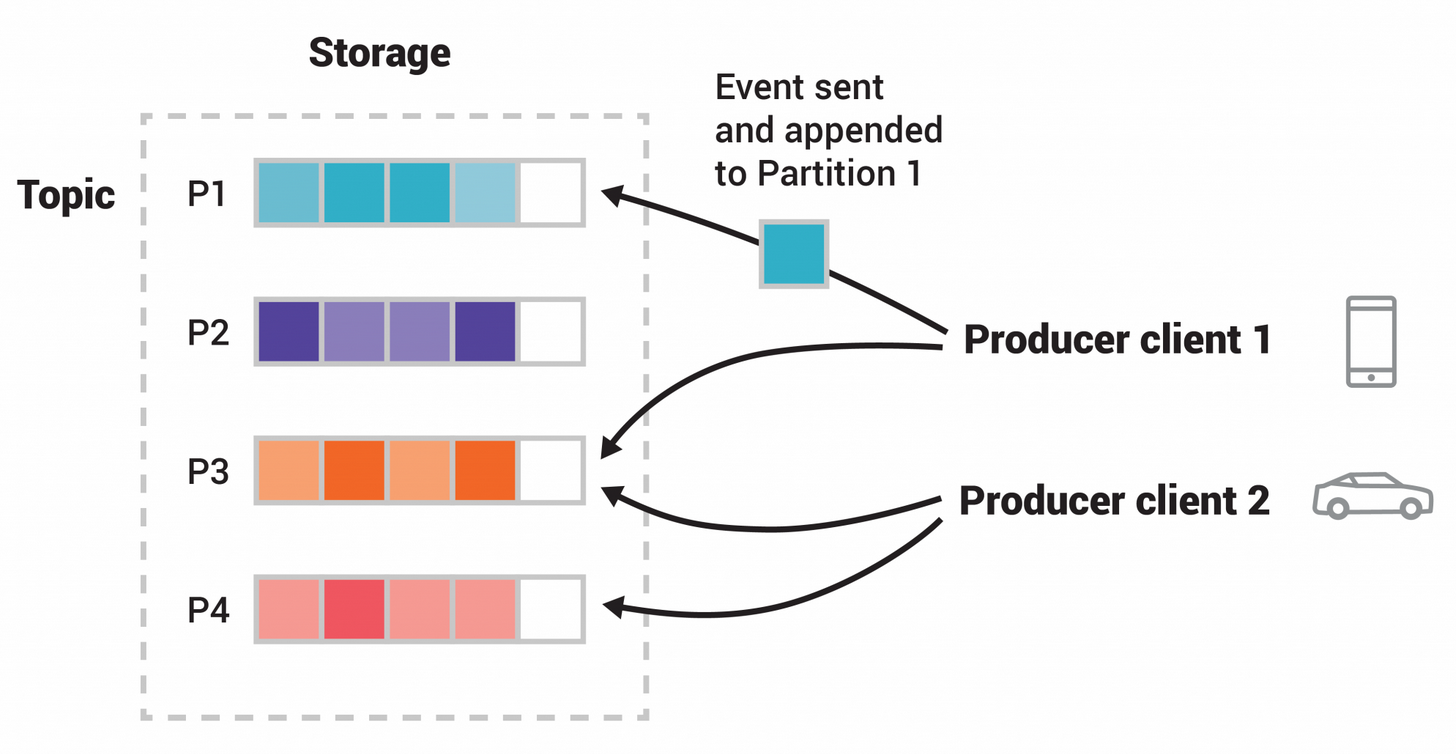 In typical applications, topics maintain a contract - or schema, hence their names tie to the data they contain. For example, in a construction application, invoices topic would contain serialized invoice which could then be partitioned by postal code, with each partition being a specific postal code. So when any producer writes into invoices topic, the broker will decide which partition the event will be added to based on the partition strategy.

We can check the topics using kafka-topic.sh:

Partitions within a topic are where messages are appended. The ordering is only guaranteed within a single partition - but no across the whole topic, therefore the partitioning strategy can be used to make sure that order is maintained within a subset of the data.

We can check the position of each consumer groups on each topics using kafka-consumer-group.sh:

There are different retention policies available, one of them is by time, for example if log retention is set to a week, within a week messages are available to be fetched in partitions and after a week they are discarded. Another retention policy is log compaction which we discussed last week.

Both producer and consumer are usually written in the language of your application by using one of the library provided by Confluent.

Today we defined some of the words commonly used when talking about Kafka. We started by looking at what a Broker is, then moved on to defining what a Topic was and how it was composed by Partition and we completed the post by defining what a Producer and Consumer were. I hope you liked this post and I see you on the next one!