Visual Code ships with powerful Git support. In this post we will look at how we can use Visual Code as default diff and merge tool for Git.

In this post we assume that we have installed VSCode and have access to code command line. If you don’t have access run CMD SHIFT P > shell command and install code in command path. Then we should be able to do:

This verifies that code is accessible from path. The important commands here are:

Just from here we can already see that we can take advantage of the difftool directly from command line:

This will open VSCode on the diff window between the two files.

Now that we can use VSCode command line, we can then directly use it as command for mergetool and difftool in Git. We can do that by editing the global configuration:

And we add or replace if those were already added:

We set VSCode as mergetool and difftool, here I’ve also disabled the backup orig files with keepBackup = false. And then we’ve specified the commands to execute when we want to open the tools.

$MERGED will open the file that contains the merge conflict.

This will open VSCode on a diff with $LOCAL and $REMOTE pointing to temporary checkout file versions having diffs.

Now that we have setup VSCode as mergetool and difftool we can now use them. For example let’s say we have a feature-a branch which has conflicts, and we try to merge it into our current branch:

Git detected a conflict that couldn’t be resolved and paused the merge for a manual resolution. We can then run git mergetool:

This will open VSCode on the file having a merge conflict allowing us to resolve the conflict: 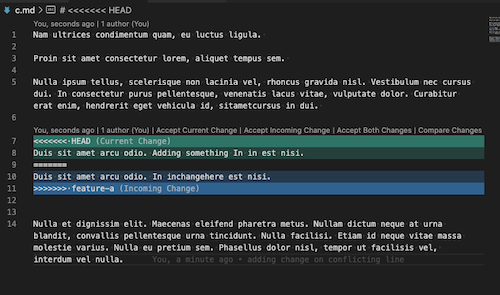 We can then resolve the conflict, save and close the file. Once we exit the file, Git knows to continue to the next file or to complete merge by staging all changes. We can then simply commit the merge changes to complete the merge:

Similarly to the mergetool, we can check the diff which we could do with git diff:

This will show the difference between develop and feature-a, we can see that feature-a would remove Test and replace it with Replacing everything test. To display the diff in Vscode we can use difftool instead:

The diff will then be opened in VSCode:

And that concludes this week’s post! See you on the next one!