From Git Ui To Cli

As a developer I use Git every day. I used to use GitExtension which is nice but at time it was really annoying, for example popups showing out of viewport, impossible to click, or random lags when fetching commits. I had been using GitExtension for at least 5 years while working on Windows, but today I am switching to a Mac where GitExtension isn’t supported. I started to look at alternatives and found some, like Fork, a nice software but similarly to GitExtension with random lags, very frustrating. This exercise highlighted to me a bigger issue; Had I been using Git command line all along, I wouldn’t have been wasting my time looking for alternative. So today I am going through some Git commands which are useful in day to day operation, and that helped me transition from a UI driven Git user to a CLI driven.

When I work on a project, I start by creating a branch out of the hosted source control website, like Github, Gitlab or VSO. All of them have a way of creating new branches. I work in a feature branch kind of workflow where a branch is made for a particular ticket or feature. And I work on that branch until I make a pull request to merge it to master branch.

So within that context, I initially create a branch kim/some-feature on the remote. 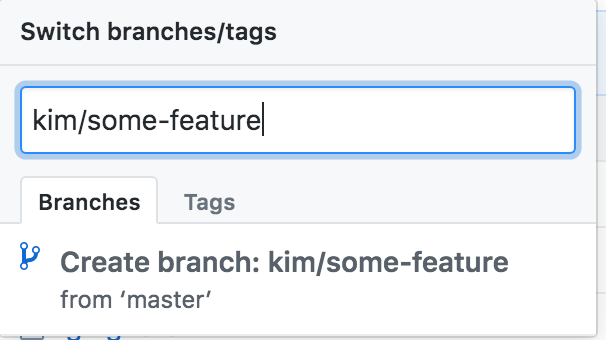 We then fetch all changes:

Which indicates to me that we fetched a new branch origin/kim/some-feature. We can also use branch -avv to see all branches with their associated commit.

we can see that we are currently on master branch on the same commit as remote HEAD. We can then checkout our newly created branch and track it at the same time, which will create a branch of the same name locally adn set the upstream.

Another look at the branches will show us that we are on the new branch.

If we wanted to check, we could also use status which will tell us which branch we are on, and what is the upstream branch set.

Lastly log can also be used to see where we are at:

Alternatively if we didn’t have a branch created on the remote server, we could have used:

This will create a remote branch origin/my-branch and while setting up as upstream of my-branch.

Work on a Branch

Now that we have a branch, we can start work on that branch. Git has the concepts of working tree, index and HEAD.

So for example if I modify a file in, I will see the following:

The working tree now differs from the index, and I can stage the file with:

Then it will be in the index,

The file is now marked to be commit. We can unstage it with reset:

And that will bring it back to non-staged or we can commit it:

We can see that our local repository HEAD is ahead from the remote repository by one commit. In fact Git will be able to tell us that with status:

We can then push the changes:

or we can also reset to the origin/HEAD which will reset the local commit back to unstaged:

And we can see that our commit is back to unstaged:

And if we want to just discard unstaged changes, we can do so with checkout:

The content of index.html was replaced by the HEAD, which was in line with the origin/HEAD therefore reverted index.html to the unchanged state.

If the file was untracked, we could have removed it with clean:

Apart from looking at the status, we can also look at the differences between different state,

We can check the difference between the working tree and index:

We can see that I added # Example change and that the last line was replaced with the same line plus a newline. If I add this to the index, there will no longer be any difference:

That’s because there are no difference between the working tree and the index. If I make another change, I will see the next difference:

We can see that the previous version of the index already have the # Example change line and it detects the further added - change after adding.

We can check the difference between the working tree and local HEAD:

We can see that the total line is there, or we can check the difference between the index and local HEAD:

Which is only the addition of # Example change since we haven’t staged the extra words.

Now lastly a useful difference to check is between your current branch and the origin/master or origin/HEAD.

This will display the difference between your current checkout latest commit branch and the latest origin/master commit, which will be the differences listed when creating a pull request.

Once the feature is completed and the PR merged, a common practice is to delete the branch. The deletion of the branch usually is done from the source control UI like GitHub where the pull request was originated. Deleting it from their doesn’t reflect on our local repository therefore in order to clean it we can use prune:

We start by checking out master branch, then fetch everything, then status shows us that our local master is behind by 4 commits so pull the latest.

Prune will remove references from deleted branches. But we will still have the local branch:

We can see that kim/some-feature is referencing origin/kin/some-feature which is marked as gone. This means that it has been pruned on the remote therefore we can delete it using -D:

And we now have completed the full workflow of creating a feature branch, working on it, checking the differences to make a pull request, and lastly cleaned up our local copy after we merged the pull request!

Today we saw how to work with Git CLI to do simple actions, like working on a branch, checking the differences and cleaning up after a PR is squashed. As mentioned in the introduction, I was a Git UI user for a long time and I am only really starting now to move away from it. There are so many other problems and frustrations in Software development that I personally feel like Git shouldn’t be adding on top of that. Therefore trimming UI, button click, lags and more importantly preventing from getting used to a specific UI is a plus during day to day operation. I would still recommend GitExtension and Fork, for those who are against using CLI, and I will still use them as it is very nice to browse repository, just like how we would browse GitHub repositories. Anyway I hope you liked this post and I see you on the next one!