Progressive Web App allows an Angular website to be installed locally and be available on the app drawer and on the home screen of a phone. Today we will see how to use Angular Progressive Web App module to transform our app into a mobile app.

To install the progressive web app package we use ng CLI in the root of the project:

We can see that it defines the following properties:

It should also be automatically added to the assests in angular.json under build and test architects.

To make sure that our manifest is found, we can run the application and look into the chrome debugger > Application section, we should be able to see our settings: 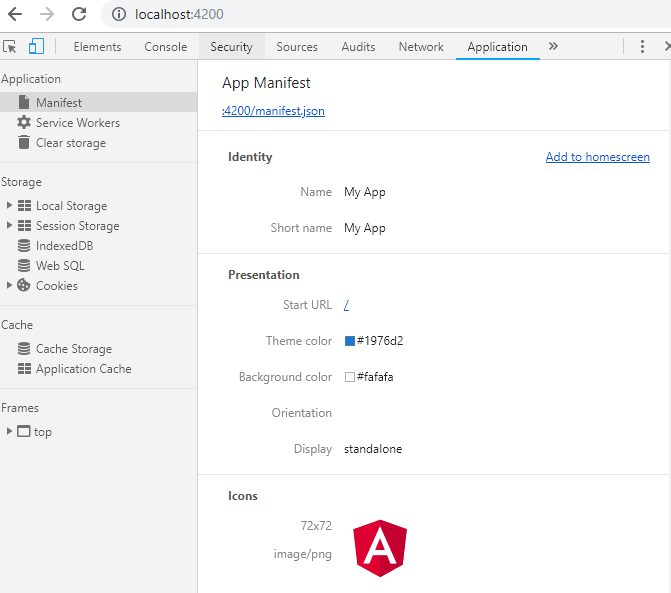 As we saw in 1), installing @angular/pwa with ng CLI also installed @angular/service-worker. A service worker brings offline capabilities to a web application. It can be viewed as a caching layer for HTTP methods. @angular/service-worker provides an abstraction over service worker which would normally be coded in Javascript. It allows us to configure the caching mechanism via a Json file called ngsw-config.json which can be found at the root of the project. Installing the package also registered the ServiceWorkerModule in the AppModule:

Lastly it also added the ngsw-config.json at the root:

The ngsw-config sets the caching policies for the service worker. It is composed by five properties, here is the typescript interface which the json deserialize to:

The difference between assetGroups and dataGroups is that assets compose the application and each asset is versioned with a hash key. Any change in those files will yield a different hash which will indicate to service worker that the version of the app changed and one of the file needs to be downloaded. dataGroups on the other end represent the data which are separated from the application version. But on their own, data have a version as well which can be used to maintain compatibility between app version and data version for situation where upgrade of API aren’t backward compatible.

In our example, our app has API calls to /api/persons and /api/companies therefore we need to define those as dataGroups:

Here our API and webapp are both hosted under the same domain therefore it is necessary to define the dataGroups, when browsing mysite.com/api/persons, the service worker will kick in and forward the route to the Angular router which will fail as no such route exists. We are now done with setting up the service worker. To be able to test it, we need to build in prod:

We use http-server to host locally our dist folder containing the production build of our app.

In action, the file dictating how the browser should act is the ngsw-config.json. It is downloaded every time the app is launched or the website is opened.

And for the API calls, we can see that when a request to /api/persons is made, it is first fetched and subsequent calls are instantly returned from the service worker. After a minute as we set, another fetch will occur.

Today we saw how we could setup our Angular application to become a Progressive Web App, we started by looking at how we can install the packages needed on Angular using the angular CLI. Then we moved on to configuring a manifest.json which sets look and feel for the application, then we moved on to configuring the behavior of the service worker which provides offline capabilities and lastly we saw how the service worker acts on the browser itself. Hope you liked this post, see you on the next one!